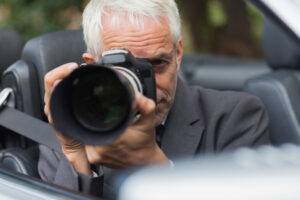 For spouses who are divorcing or suspect cheating, spousal spying using cell phones and readily available apps to record conversations, video events and monitor the other’s movements has become common.

Some forms of spousal spying are legally permissible, while others violate criminal and civil laws. It is obviously very important to understand how federal and Washington state laws treat these actions, in order to avoid prosecution.

What spousal spying actions are permissible in Washington state?

The following information assumes both spouses are both physically present in Washington. If either the spouse spying or the spouse spied upon is in another state, this information may not be accurate. Consult with a divorce attorney if you are contemplating a divorce or child custody action to be sure you have the most current information and advice tailored to your case.

1) Can I record a private conversation with my spouse without his or her knowledge?

Generally, the answer is no, but exceptions are discussed below. Washington statute RCW 9.73.030 et seq. makes some spousal spying techniques illegal. For example, Washington law requires the consent of both parties in order to legally record a “private conversation,” including phone calls, even if only one party is located within the state.

Generally, the answer is no. Federal law under the Electronic Communications Privacy Act (ECPA) prohibits a spouse from intentionally accessing email or private social media messages without authorization to do. If one spouse has given their email or social media password to the other spouse, then that spouse has been authorized to use the account — but only insofar as permission was granted. For example, if you were given a Facebook password so that you could post a photo but then went beyond that task and read private messages, you could be violating federal law.

However, if a spouse receives information unintentionally, such as an email being sent by mistake, or your spouse used your phone to log into an account but then failed to log out so messages began appearing on your phone, then this is not in violation of the law because the law only governs intentional interception.

3) Is it illegal for me to install an app that sends me copies of my spouse’s text messages without my spouse’s consent?

Yes, that is illegal. Federal law prohibits a person from intentionally intercepting or attempting to intercept a phone conversation or other electronic communication by use of electronic, mechanical or other devices. Installing spyware on your spouse’s cell phone without consent is illegal, and a spying spouse may be ordered to pay damages, which increase based on the length of time the spyware was used. The spouse may also be sentenced to up to five years in prison for such a violation.

Taking photos in public is not illegal, but following your partner around town can quickly escalate into a stalking charge. The Federal Interstate Stalking Act makes it illegal to cross state lines with the intent to injure or harass another person and to create a reasonable fear of death or serious bodily injury by such acts — whether that fear is manifested by the victim or the victim’s family.

5) Can I erase an illegal recording that my spouse made of me?

No. Any person who alters, erases, or wrongfully discloses a recording made in violation of Washington state law is also guilty of a gross misdemeanor. You might be wondering: “Why can’t I erase this recording? I am the victim!” The answer is, in part, that this is evidence of a criminal act.

Nobody may destroy evidence of criminal conduct. While the recording cannot be erased, it also cannot be played for others (keeping in mind the exceptions set forth above) without violating the statute.

6) Can I take photos, or make silent videotapes, of my spouse without his or her knowledge?

Usually. Washington state law does not ban photographs or soundless video recordings. If your spouse is passed out from drinking or drug use in a public place, like Disneyland, you are free to photograph that. If you have security cameras in your home and they capture footage of wrongful conduct, that would generally be admissible. However, some photographs and video recordings violate privacy and could result in fines, and videos taken with audio are subject to the above strict federal and Washington state laws governing privacy and interception of audio recordings.

7) Can I install keystroke logging or other spyware on my spouse’s laptop or cell phone?

No. Washington law makes it illegal to use spyware. Under RCW 19.270.020, it is illegal to install spyware on somebody else’s property without consent. A spouse found violating this statute might be held criminally and/or civilly liable.

8) Can I legally follow my spouse to see where her new boyfriend lives?

This is legally risky conduct and could amount to criminal activity. Similarly, if a divorcing spouse secretly places a GPS in a divorcing spouse’s car to monitor his or her movements, such action will subject the spouse to allegations of stalking and likely result in issuance of a protection or restraining order, even if privacy laws are not directly violated.

Rather than risk of criminal activity, a private investigator can be hired to perform certain surveillance activities.

9) My spouse/ex-spouse keeps calling my new boyfriend in the middle of the night and hangs up, posts horrible things about my boyfriend on Facebook and sends him Facebook messages. Is this illegal?

Yes. In Washington, this is unlawful harassment, which means: “A knowing and willful course of conduct directed at a specific person which seriously alarms, annoys, harasses, or is detrimental to such person, and which serves no legitimate or lawful purpose. The course of conduct shall be such as would cause a reasonable person to suffer substantial emotional distress, and shall actually cause substantial emotional distress to the petitioner, or, when the course of conduct would cause a reasonable parent to fear for the well-being of their child.”

While you can put many of your opinions of Facebook under the First Amendment, this does not mean you can make threats or send harassing messages. Likewise, repeatedly calling in the middle of the night for no lawful purpose against the other party’s wishes amounts to harassment.

Legal advice should be sought before engaging in spousal spying

Spousal spying is generally risky, not only for the spying spouse, but for the spouse being spied upon, the children of the marriage and innocent third parties. Spying on your spouse can involve unsafe conduct and may lead to criminal or civil repercussions on a federal and state level. If a spouse’s spying activities are found to be illegal, any evidence that sprang from this conduct cannot be used at a divorce or custody proceeding.

However, under certain circumstances, such as when threats of physical harm against a spouse or child are made over the phone, audio recordings should be done to collect evidence for obtaining a protection order at both the criminal and civil level. Prior to any attempt to spy on your spouse, however, it is crucial to obtain legal advice to make sure no laws are being violated.

At Weintraub Law Office, we have substantial experience with and knowledge of spousal spying laws and the admissibility of any gathered evidence in your family law case. Please contact us if you need legal advice on a spousal spying issue.